I met Oreon after my family and I moved to Inman Park in 2000. It was immediately obvious to me that he loved the outdoors. He was an avid paddler and a canoeing instructor, for example, and as our own group’s ambitions and activities ramped up, he plunged right in. In those years, Oreon never missed a single Tree Watch event, whether it was a planting, a guided tree walk, or a maintenance project. He always wanted to be in the mix, and he was always eager to help, to work hard, to get the job done. Inspired by his experiences with Tree Watch, Oreon went on to participate in many activities with Trees Atlanta, including certification as a Tree Keeper.

One year at a tree planting, I assigned Oreon and Amy Higgins the job of planting a katsura tree in the Poplar Circle section of Freedom Park. The tree was a mess — just horribly root bound. Oreon and Amy hacked and tore and unwound it, working and working to give it a chance to live. For a while, it seemed that the tree wouldn’t make it. It struggled. It limped along. Half of it died. But as long as it put out leaves, we were determined to see what might happen. This is what happened: 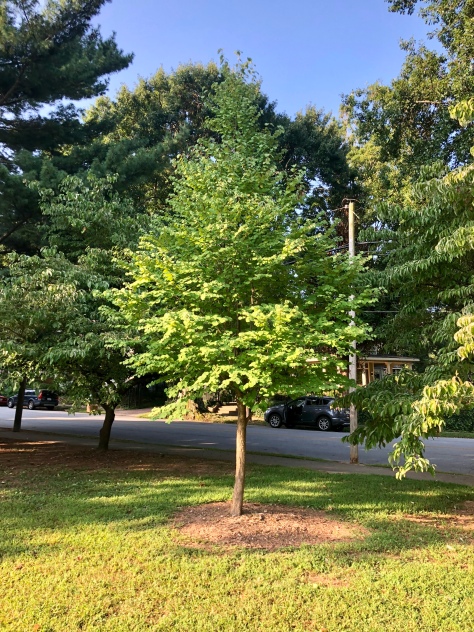 In one sense, I didn’t have the privilege of meeting Oreon when he was at his best. In another sense, I really did. Because Oreon was probably one of the best examples any of us has ever encountered of someone who did not let bad luck get in the way of living his life fully, and for Oreon, living life fully meant being part of something worthwhile.

Here’s a picture of Oreon (center) with his beloved father, Earl Mann, who went from selling peanuts as a boy at Spiller Field (later Ponce de Leon Ballpark) to president and owner of the Atlanta Crackers. Notice that smile, in both pictures — it was Oreon’s trademark. We will miss him.