We thought about that scene when we were in Freedom Park today, repairing the damage someone caused these Chinese elms (Ulmus parvifolia). It seems that he was frustrated that the city is not keeping the branches out of his face. 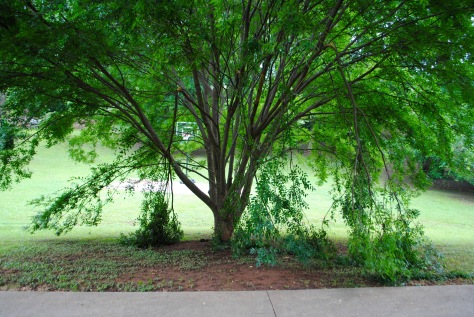 Now, the City of Atlanta planted these trees about a decade ago. Did the city work with Freedom Park Conservancy to do so? Not clear. What is crystal clear is that no one from the city reached out to Inman Park before planting these trees.

That innocent failure to communicate? In a sense, it led directly to this vandalism and the necessity of our rescue mission.

Because these were the wrong trees in the wrong place, as we might have pointed out. Chinese elms are high-maintenance trees: they grow quickly; they branch profusely; on some specimens, as here, the branches tend to droop. Moreover, some states are reporting that these non-native trees are invasive in our natural forests. Wrong tree!

Wrong spot, too, because if you’re going to plant a droopy, weepy tree, don’t plant it next to a bike path!

There are so many well-meaning agencies, groups, and individuals in Atlanta, all of whom want to do right by our urban forest. We should recall what Henry Ford is supposed to have said:

Coming together is a beginning.

Keeping together is progress.

Working together is success.